We’re heading back to Cup North’s Manchester Coffee Festival, an independent Manchester-based coffee festival run with the aim of bringing the best of the specialty coffee industry to the north of England. Returning to Victoria Warehouse the first weekend of November, this marks the fourth year that the Cup North dream team of Hannah Davies and Ricardo Gandara have put together the most warm and welcoming coffee show we’ve ever had the pleasure of attending.

Whilst the event itself is still just a bright spot on the horizon (it’s yonks away!), we know for sure that this year will see the return of a bigger and better BRUBIACEAE as well as an evening panel discussion for those who want to kick back, relax, and have a bit of a giggle after hitting the show floor.

Read on for more information about the exciting stuff going down in our space at this year’s Manchester Coffee Festival! Just can’t wait until November? Reminisce about years gone by whilst the clock ticks ever closer–we’ve got videos from 2014, 2015, and 2016 for you to watch in the meantime! 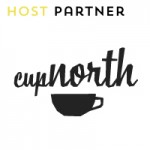 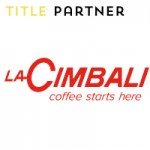 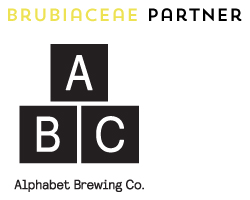 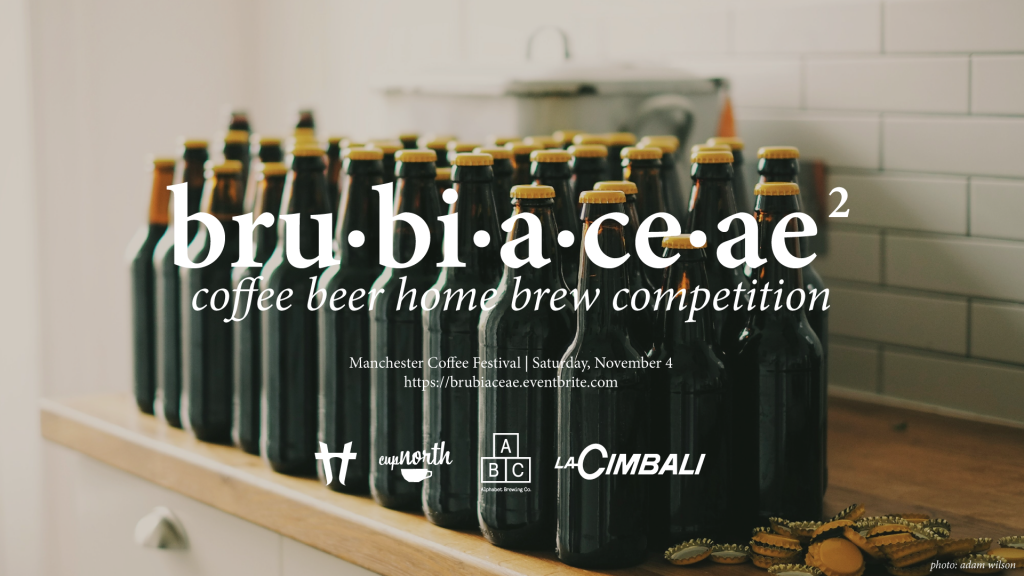 So, what do I need to do?
First of all, you’ll need to register here, so that we know to expect your submission in November and have your contact details so that we can coordinate the fun part: presenting samples of your beer and explaining your process to attendees at Manchester Coffee Festival! Then, using coffee flowers, coffee, or chaff (or some mix of these), you’ll need to brew 2L (for public tasting) and 4 x 330mL bottles (for judging). Last, but certainly not least, you’ll need to get them to the Manchester Coffee Festival on Saturday, November 4th for judging. Double-plus bonus if you bring your beer AND yourself: you’ll get to present samples of your beer to the judges AND the festival-going masses!

What’s in it for me?
Well, aside from a chance to play with different parts of the coffee plant in your homebrew (or even just play with coffee!) and a chance to chat to coffee and beer geeks alike, competitors also get all-day Saturday entry into the Manchester Coffee Festival,

a chance to win a Flat White brew day with none-other-than Manchester’s own Alphabet Brewing Co. AND a £100 bar tab at their very awesome brew tap!

How will entries be scored?
Oh, we’re so excited  you’ve asked! We worked closely with Brian & Tasha (Weird Beard) to build a scoresheet that brings the best of beer and coffee scoring together into one, handy sheet. 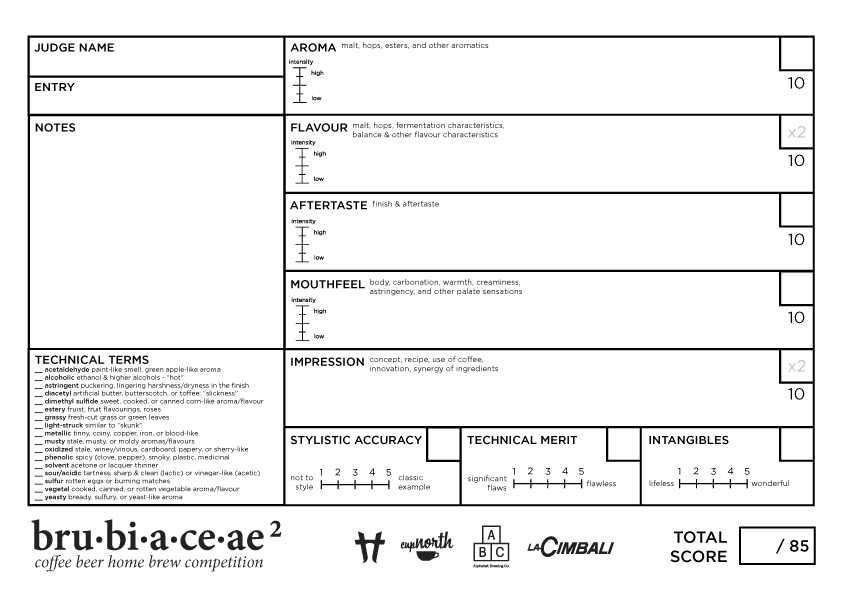 Want to get a closer look? Just click on the image above to be taken to an easier-to-read, printable PDF!

Got more Qs?
We’ve (probably) got answers. Read all the details about the competition here and, if your question still haven’t been answered, just pop us a mail!

This year’s Brubiaceae winning prize is made possible by the kind support of Alphabet Brewing Company.

About Alphabet Brewing Company: Alphabet Brewing Company is an independent brewery based in Manchester, UK that brews modern beer styles with high-definition flavour and aroma. Keen to experiment, create, and have fun with their beers, a long list of one-offs, mashups, and collaborations sit alongside their core range of Hoi Polloi (4.8% Pils-style lager), A to the K (5.6% Oatmeal Pale Ale), Charlie Dont’ Surf (4.0% Session IPA), Juice Springsteen (4.5% Tropical Pale Ale) and – of course – Flat White, a 7.4% White Breakfast Stout made from coffee, milk, oats, and malt goodness. For more information, please visit http://www.alphabetbrewing.co.uk/. 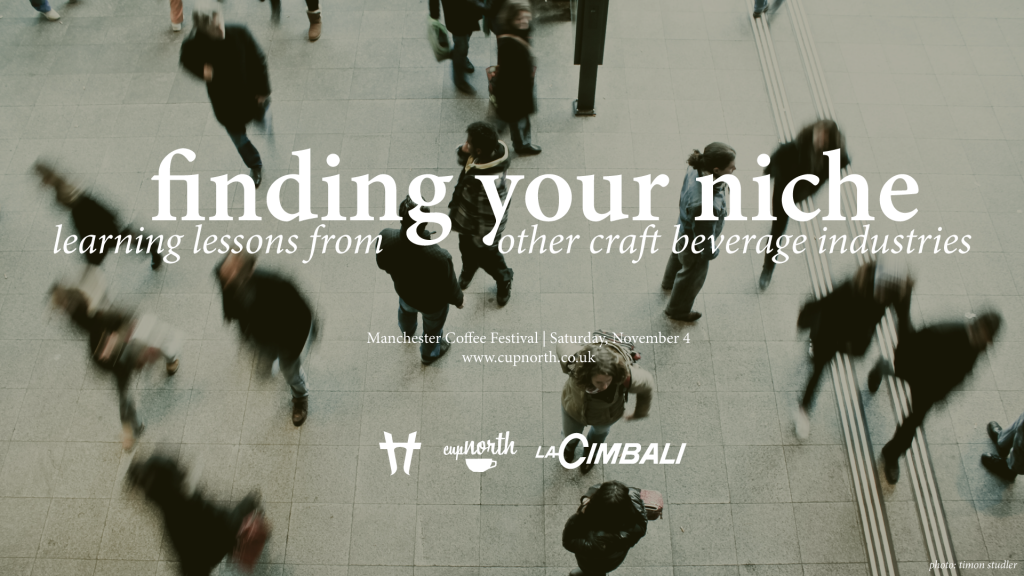 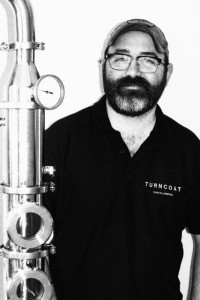 TERRY LANGTON | Turncoat Distillery (Liverpool)
Terry Langton started a craft brewery in 2010, before craft brewing was even a term in the UK. Having been a community worker and consultant in social care for many years Terry decided to start a brewery with an old work colleague.  This was at a time when independent and local products were not on peoples radar in Liverpool, Terry has seen the challenges of start up, local loyalty development and expansion of a company.  Having also set up the Liverpool Craft beer Expo, Black Lodge Brewery and helped a bunch of other breweries get on their feet with advice and help, Terry successfully sold his brewery last year.  His focus is now on craft distilling and launched the already well regarded Turncoat Distillery in June of 2017.  Terry’s approach to business is to pursue collaboration, be as transparent as possible and choose customers to grow with.   The Craft Distilling explosion is yet to happen in his opinion and it is a new market to develop and shape.  Terry has a degree in Business and Economic and is also a member of the Institute of Brewing and Distilling.  Married, kids dogs – the works.

BRYAN SPOONER | Co-Founder, Weird Beard Brew Co (Hanwell)
Bryan Spooner is founder, owner, and headbrewer at Weird Beard Brew Co. He started homebrewing about a decade ago, just for fun and to make cheap booze. It was through winning awards for Sadako (which is now our flagship imperial stout), he decided to make the jump to brewing professionally.

Starting out with Gregg (Irwin), another award winning homebrewer, Weird Beard was founded end of 2012 and their first commercial brew was in February 2013. Bryan has always been at the helm of brewery operations: brewing (less nowadays but still very much involved), packaging, scheduling operations and all the admin that goes with the brewing side.

With Gregg’s departure earlier this year, his directorship has stretched across to the office side of things and he’s taken on a broader managerial role. Despite the growth of the business and Gregg leaving, the brewery has a more concentrated vision as to what Weird Beard is.

NATASHA WOLF | Events & Communications, Weird Beard Brew Co (Hanwell)
Natasha graduated from university as a Biochemist, so her passion for beer revolves around it being “Liquid Science”. Post-research work, which she found wasn’t all that she anticipated it to be, Natasha went back to working in hospitality: after some training in events drink pairing at  Fullers Gastropub in London and more exposure to the modern day beer scene, Natasha became more of a beer geek, moving onto working at BrewDog Camden, where she ran their “Beer Schools” and curated tap-takeovers, educational events, and pairings.

It was through the first ever BrewDog Collabfest that Natasha fell in love with brewing, her first time, coincidentally at Weird Beard, where she now splits her time between brewing work, events, and communications.  Despite being office-based primarily, Natasha has been at Weird Beard since the early days and have done almost all the jobs expected in the brewery, including implementing their QC program and training staff about off-flavours (she needs her science fix, after all!). Of course, the beer-food pairings or anything to do with flavour matching and the science behind that, are the sorts of events that excite her the most.

SIMON LAFRANCE | Brewer, Alphabet Brewing (Manchester)
Simon’s interest in brewing started about 10 years ago and, like many beer enthusiasts, it started with home brewing, attracted by the idea of cheap beer but most importantly to answer the questions: ‘Can I really make beer myself?’ and ‘Could that beer actually be good!?’. Later, while pursuing a degree in mechanical engineering, he got involved with a group of students from different backgrounds and fields of study but with similar interests. They tried to learn about all the aspects of beer making, working in their small uni brewery and in partnership with a local microbrewery. Together, they covered a wide range of topics including: growing yeast from cultures, improving the brewing efficiency, developing quality control procedures, automating the process as well as learning about the ingredients and recipe development.

After working in engineering for a bit, Simon moved from his homeland Canada to Manchester and saw this as the opportunity to make the jump to full-time brewing. He’s since been working for Alphabet Brewing Co and loves their fun and experimental approach to brewing.

Having witnessed the rise of craft breweries/distilleries in Quebec and now in the UK, he might bring a fresh perspective and help you find your niche.

Tamper Tantrum’s programming for Cup North’s Manchester Coffee Festival is made possible by the kind support of our long-standing Title Partner, Cimbali UK.

About Cimbali UK: a world leader in the production of professional machines for espresso coffee beverages, representing their history and designing their future with their brands. They stay one step ahead of the market, offering innovative, superior-quality products and outstanding service, whilst enhancing and developing human resources in a context increasingly geared towards teamwork, integration, and synergies. For more information on Cimbali UK, please visit www.cimbaliuk.com.

About Cup North: Cup North is an independent Manchester based coffee events company run with the aim of bringing the best of the speciality coffee industry to the north of England. The Cup North event was started in 2014 by Hannah Davies and Ricardo Gandara who met at a Manchester coffee shop through their mutual love of coffee. This year, after three highly successful shows, Cup North will be hosting the second ever Manchester Coffee Festival on 4 & 5th November 2017. For more information, please visit www.cupnorth.co.uk.